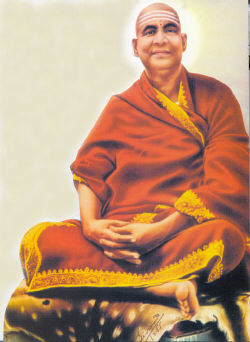 Born on the 8th September, 1887, in the noble family of Sage Appayya Dikshitar and several other renowned saints and savants, Sri Swami Sivananda had a natural flair for a life devoted to the study and practice of Vedanta. Added to this was an inborn eagerness to serve all and an innate feeling of unity with all mankind. Though born in an orthodox family, Swamiji was broad-minded and catholic, pious and devout.

His passion for service drew him to the medical career; and soon he gravitated to those parts of the world which most needed his service. Malaya claimed him. He had also commenced editing a Health Journal and wrote extensively on health problems. He discovered he espoused it as his own mission.

It was divine dispensation and the blessing of God upon mankind that the doctor of body an mind renounced his career and took to a life of renunciation to qualify himself for ministering to the soul of man. He settled down at Rishikesh in 1924, practised intense austerities and shone as a great Yogi, Saint, Sage and Jivanmukta.

Swami Sivananda dressed to cloth himself, ate to live, and to serve humanity. A small dilapidated Kutir, not resorted to by others, and infested with scorpions protected him from rain and sun. With all his intense Tapas, Swamiji, did not neglect service of the sick. He visited the huts of the Sadhus with medicines, served them and shampooed their legs. He begged food on their behalf and fed them with his own hands when they fell sick. When necessary, he kept vigil throughout the night by the side of the bed of the ailing Sadhus. He served the pilgrims and saw Lord Narayana in them.

Swamiji traveled the whole length and breadth of India during his Parivrajaka life. He conducted Sankirtan and delivered lectures. Swamiji, then, went on a trip to Kailas and Badri.

He returned after the pilgrimage and started the Sivanand Ashram in the year 1932 on the right bank of the holy Ganga. In 1936 was born The Divine Life Society. He found and old Kutir, dilapidated and disused, which looked like an abandoned cowshed. To him it was more than a palace. He cleaned the Kutir and occupied it. Then, the increasing number of disciples who sought his lotus feet, undaunted by forbidding conditions of living, necessitated expansion. They found more sheds vacant, but uninhabitable filthy. Thus began the early life of The Divine Life Society.

Sri Swami Sivananda believed in synthesis in everything, in Yoga as well as in the alleviation of human suffering. Swamiji radiated his divine and lofty message of service. Meditation and God-realisation to all parts of the world through periodicals and letters, through his books, running to more than three hundred. His devoted disciples were drawn from all religions, cults and creeds.

Swami Sivananda’s Yoga which he has significantly called the ‘Yoga of Synthesis’, effects a harmonious development of the ‘hand’, ‘head’, and ‘heart’, through the practice of Karma Yoga, Jnana Yoga and Bhakti Yoga. Widest possible dissemination of spiritual knowledge is the primary object of the Divine Life Society. Its illustrious founder Sri Swami Sivanandaji Maharaj tirelessly worked for three decades from his small hermitage on the bank of the Ganga in pursuance of this worthy goal.

On the 14th July 1963, the Great Soul, Sri Swami Sivanandaji Maharaj, entered Mahasamadhi in his Kutir on the bank of the Ganga, in Shivanandanagar.

Though Swami Sivananda attained Mahasamadhi, his spirit still guides the noble work initiated by him which is gathering momentum with every passing day. Senior monks of the Divine Life Society under the leadership of their present President, Sri Swami Chidananda, continue to work ever more vigorously for the spread of the Divine Life Gospel, summed up by the Master in six succinct words : "Serve, Love, Give, Purify, Meditate, Realise."