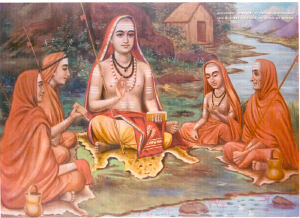 RELIGION IS realisation; it is not mere learning—this is the divine message which stands deeply in the minds of every Hindu. This is not a mere fancy. This is not a mental conception. This is not a stretch of imagination. It is not a coinage of the brain. Nor is it a decision arrived at by vehement vituperation and incongruent argumentation promulgated by an ordinary intellectual prodigy.

This is the assertion of Shankara, India’s greatest philosopher-saint, the incarnation of Lord Shiva, reverently known as Srimath Adi Shankaracharya.

What can we take him for except the Lord Himself, who proclaims authoritatively and undauntedly: “I am the Self of all; I am the all; I am transcendent; I am one without a second; I am the Absolute; I am the infinite Consciousness; I am homogeneous bliss”.

Shankara is our Vedanta Guru. He was God incarnate. He was born at a time when Indian thought and culture were decaying; when they underwent sore distraction; when ethical glory and the widespread influence of the Buddhistic cult was gradually dying; when there was complete chaos and confusion; when innumerable sects sprang up and, with their own individual doctrines, confounded the masses; when evil social influences and blind superstitions, garbed falsely in the clothes of religion, attracted the credulous masses into a frenzy, and ambushed them into complete ignorance of the ultimate Reality. There were no less than seventy-two cults and sects of this type which carried away people from the right path.

The advent of Lord Krishna rejuvenated Hindu religion and saved many a soul from complete ruin, souls which would otherwise have subjugated themselves to passivism due to the misinterpretation of the Vedas and the Upanishads. In the same way, Shankara appeared on earth to deliver very many struggling souls. He set them free, and enlightened them through his peaceful, unostentatious persuasion and loving propaganda. Through his irresistible logic, he planted the triumphant banner of unique intellectual conquest over all other schools of philosophy. Before him, all other theories proved to be phantoms and fallacies.

It was only Shankara who gave the unshakable concrete form to Hinduism and established the unity and purity of enlightened Hindu thought and culture. Superstitions and corrupt practices melted away in no time.

The age-long six systems of theism which were suppressed by the prattlers re-emerged in their original glory only through the concerted efforts of Shankara.

His victory over other systems of philosophy was not due to a stubborn grip onto his own faith and reasoning without considering the pros and cons of others. He had mastered even the minutest intricasies of the other theories. The underlying currents of his thoughts were the foundations of the other systems. It is for this reason alone that his philosophy was recognised with much reverence by all the other schools of thought, despite differences in their superstructure.

The secret of his conquest and the charm therein lay in his most apt and reasonable illustrations in every case. He never based his arguments on theoretical axioms and untestified hypotheses, but entirely on integral experience. Further, all his arguments were based upon the Vedas as well, which are genuine and authoritative.

Shankara never entered into hot discussions to substantiate his case or disprove others’ theories. With his gigantic intellect he poured out his masterly exposition in simple and clear terms with the same supreme authority of the Gita, Upanishads and the Brahma Sutras, the self-evident validity of the Sruti Pramana, and so on.

Above all, the philosophy of Shankara is not restricted to the highly intellectual. It is within the easy reach of even the layman. With his profound knowledge, all-comprehensive learning, keen intuitive insight and convincing explanations, he has erected the strong edifice of Vedanta, equally accessible to the scholar and the layman. How effectively he prescribed “Bhaja Govindam” to the scholar who was racking his brains in committing various scriptures to memory!

Vedanta is not the only aspect of philosophy he has preached to the world. He has entered the heart of every earnest seeker after truth. He encourages the worship of various forms of the Lord and greatly advocates Bhakti. Without a tinge of partiality to one form or the other, he has composed innumerable hymns, each brimming with devotion and philosophical truth, each inculcating divine ecstasy and perennial joy even in the tender undeveloped mind. His untiring work for the welfare of mankind marks him out as a veritable, dynamic Karma Yogi, too.

At the background of all these, his devotion to his Guru is supermost. Mark what he says: “Any person who realises ‘I am That Brahman’ through the unparalleled mercy and glance of the Sadguru, loses all feelings of doubt and, with his mind free from illusion, attains liberation even while living in the body”. How much efficacy and glory lie in devotion to the Guru!

Shankara Jayanthi falls on the 5th day of the bright half of Vaisakh (May-June). On this day, study his works, pray and meditate. May you be showered with his blessings!

This article has been reproduced from "Hindu Fast and Festivals" by Swami Sivananda.