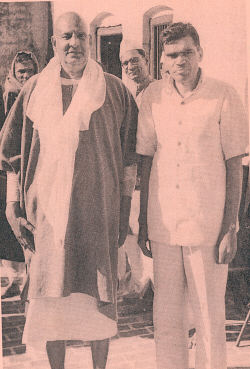 Dr. Bhanushankar Adhvaryoo, lovingly called “Bapuji” and also known as Sivananda Adhvaryoo as the name given by Sri Gurudev Swami Sivanandaji Maharaj and in later years of his life known as Swami Yagnavalkyananda after receiving Sannyasa from Sri Swami Chidanandaji Maharaj, was the founder of the first Divine Life Society branch in Gujarat in 1956. He was also the first editor and publisher of the “Divya Jivan” magazine.  He was one of the foremost disciples of Sri Swami Sivanandaji Maharaj and ever-enthusiastic propagator of his message. Having met Gurudev in 1952 for the first time, he adopted the ideals of service to humanity. “Service to the mankind is the service to the God” has become his life slogan. He was an ophthalmologist who worked ceaselessly to alleviate the plights of the blind, the poor and the downtrodden.

After taking early retirement from his government service in 1956, he spent remaining 42 years of his life serving selflessly while spreading Gurudev’s message. In his career, he had about 3 lakhs cataract surgery to his record and treated countless other illness.

Revered Bapuji had multifaceted personality like a genuine diamond. He was a dedicated disciple, a skillful and competent administrator and a spiritual giant who had attained the ultimate enlightenment. As an administrator, he was truly speaking “Bapuji”, behaving fatherly to all his employees, helping them and solving their problems and for the people around him, he was extremely compassionate and kind. Institute was like a family to him. As a Yogi, he was a perfect blended personality of Bhakti, Jnana and Karma Yoga.

He chose “Virnagar” as his Karma-Bhumi, where he established hospitals, schools, library, hostels, and various other service oriented organizations such as “Sivananda Mission” and “Sivananda Parivar”.