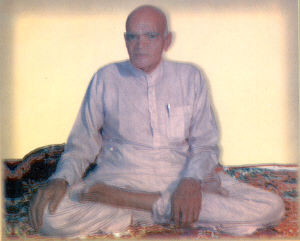 Thousands of people flock to Ananda Kutir every year for the Darshan of Pujya Swami Sri Sivanandaji Maharaj and for his blessings. Majority of them address and take him as their Gurudev. Amongst these visitors are the royal families, ministers, officers, lawyers, doctors, professors, teachers, business people and even farmers and labourers. The intention with the majority is to seek the blessings of Gurudev for physical gain in one way or the other. All address him as Gurudev and claim to be his disciples. This question will vex anyone, whether by mere Darshan of Gurudev will shower his blessings. If not, what should be the path for the disciple if he wants to earn his blessings and how would one be fit for his blessings.

Once one man approached Gurudev for his blessings. Swamiji replied: "Blessings are not obtained so cheaply. One has to earn it. One has to do Sadhana. Then and then only, the grace of Guru flows." In short, Swamiji is stressing two points for the disciples.

1. Every one has to do his Sadhana himself, Guru will direct him, make him aware of the pitfalls on the path but he cannot do Sadhana for the disciple.

2. This Sadhana should be done with proper Bhava (attitude). If the service is done with Bhava (Narayana Bhava) towards the sick and the afflicted, it would be first class Sadhana. But if the same service is done without that Bhava it brings almost no result. Look at the example of doctors and nurses. If they serve the patients with that Bhava they would be tremendously elevated but we see that this is not common because there is no such Bhava; work is done but because it is the part and parcel of the duty of service.

With this consideration one who wants to tread the path of Sadhana should become a pacca disciple and proceed step by step on the path with the determination not to step back even once. Remember again, two things, Bhava and Shraddha (faith) are essential for any progress. I humbly suggest the following stages.

Stage I: Believe oneself to be the Sandals of the Guru.

One must believe firmly that one is no more than the shoes of Gurudev. This should be the real Bhava from the bottom of the heart and one should behave accordingly. To be fit to be the shoes of such a great man (Maha Manav), Sri Swami Sivanandaji Maharaj, is not a small thing. By being saturated with this Bhava, one gets some satisfaction that one is at the feet of Gurudev and that he is able to, or rather has been given, opportunity to protect his feet.

Just as shoes do not remain quite long on the feet of Gurudev, one is not able to maintain this Bhava for a longer time in the beginning. In being his shoes one learns the most important quality of humility and gets over the evil of Abhiman (ego). This Abhiman is the greatest hindrance to progress in any path, and more so in the spiritual path. Swamiji has stressed that the subtle Abhiman of being a Sannyasin is the worst of all the Abhiman. In similar way, one must guard oneself from that subtle Abhiman that one is a prominent disciple of Swamiji.

In this process one shall cultivate humility and eradicate Abhiman with all its possible forms.

When one thinks that one is well-established in this stage, then would begin the second stage.

Stage II: Believe oneself to be the Danda (stick) that Gurudev holds in his hand.

Keep fit so that the Guru can use you as his instrument as he chooses. If this Bhava gets established then the pride of "Doership"—"I did this," "I am doing such and such a thing," "I am going to do this thing next year" will vanish. The knife is cutting but cannot say that it is operating. It is the surgeon who operates, the knife being the instrument. One must become a sharp knife in the hands of the Master Surgeon, Sri Swami Sivanandaji Maharaj. He will do the finest operation of our "ego-dectomy."

Because of this Bhava of being the stick one may have the satisfaction of being of some service to him and one shall have the privilege of being in his hand. One is so lucky to be in his hand for which thousands crave.

State III: Believe to be the pen with which he is writing.

One must write about him and for him. It is not the pen that is writing but the hand which holds the pen. Pen is only the instrument. It writes what the mind dictates. One must surrender the mind to Gurudev and only write what the Master Mind dictates to the pen,—oneself. His mind shall be the ruling mind. One should have no independent existence, i.e., complete surrender to Gurudev.

State IV: Believe to be his spectacles.

If one's glasses are dirty, one cannot see properly. In the same way, by being Gurudev's glasses let us clean the dirt in ourselves first. This will make one quite pure. One must feel that his X'ray eyes would see the slightest dirt in ourselves and therefore the necessity of self-cleansing.

It is not the glasses that see but the eyes. Glasses are only an aid. If one is Gurudev's glasses one must see things as he sees. One must adjust one's vision according to his. In this Bhava one is in Gurudev's company for the greater part of the time as the glasses are in use for a long time and by this time one has raised oneself to that stage as to be in Sattvic mood for the greater period than in the beginning.

If one has passed through all these stages with proper Bhava, one may consider oneself to be the "upper cloth" for Gurudev and be always nearer to his heart. When one reaches nearer to Gurudev's heart, I think life's Sadhana is over. It is at this stage that Gurudev's real blessings will grace us. Let us be prepared to earn this now, in this very life only.