Most Worshipful and Revered Guru Bhagwan, Sri Swami Chidanandaji Maharaj has attained Mahasamadhi and merged into the bliss absolute at the age of 92 years on Thursday, 28th August 2008 at 8:12 PM.

Disciple and Successor of H H Sri Swami Sivanandaji Maharaj and President of the world renowned Divine Life Society for the last four decades, Sri Swami Chidanandaji Maharaj was working and serving the Divine Cause of Sri Gurudev's Mission tirelessly and spreading His Divine Life Message all over the world. He was an embodiment of humility, purity and kindness. He lived a life and ideals of a true renunciate. Service to lepers became His ideal and worship to Lord Narayana. He served them with tender love and compassion. He was inspirer of CHIPKO movement. His work for the protection of Himalaya and Ganges will be cherished for ages to come.

Revered Saint, Mother Teresa considered Him a Living Saint Francis of Assisi. For His own Guru, Sri Swami Sivanandaji Maharaj, He was  an incarnation of Buddha.Whereas the entire Europe regarded Him an Uncrowned King. Sri Sri Maa Anandamayi saw in Him Lord Narayana Himself. Most Worshipful and Revered, Sri Pramukh Swamiji Maharaj of BAP’S, has seen in Him His own Guru Pujya Yogiji Maharaj's Holy Presence.

Linguist, perfectionist, full of serenity, divinity, absence of vanity, simplicity, equanimity, non-irritability, humility, integrity and nobility were His laudable virtues that earned Him reverence from the people of all four corners of the world. His service and sympathy to sick and downtrodden, poor and needy, birds and beasts were incomparable. He was oozing love from head to toe forknown and unknown.

His mortal coil was brought to Rishikesh at 1:00 AM and was immersed in holy stream of Ganges before sunrise of 29th August, 2008.

In His will, He has expressed the desire not to make any monument in His name, not to be informed anyone of His passing away, not to organize even any feast and festival traditionally performed when a monk cast away the mortal coil.  But in case, if devotees wish, they can feed the poor, sick and street beggars.

Though physically, Beloved & Worshipful Holy Master H H Sri Swami Chidanandaji Maharaj may not be with us, but through His Virat Swaroop, He will be inspiring, guiding and protecting His countless devotees and disciples who are busy serving the Mankind and struggling to achieve the realization of the absolute. OM Shanti ! 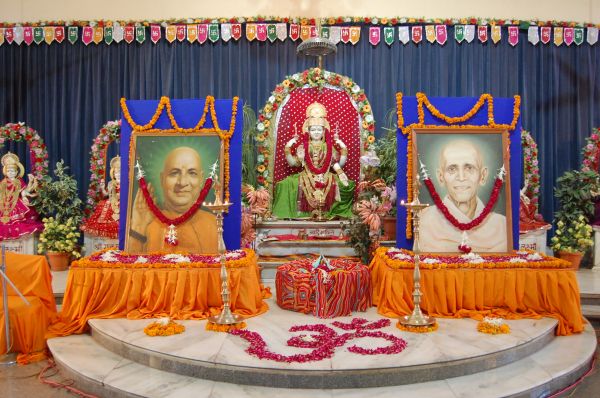 Mahasamadhi of our Beloved Gurumaharaj

On August 26 , 2008, news was received of missing pulse of H. H Sri Gurudev from Dehradun to Sivanand Ashram(Ahmedabad), which was immediately conveyed to Sri Swami Adhyatmandaji, who was on His "Divya Tour 2008" to the west in Milwaukee (USA). Upon Swamiji’s instructions,  Sri Birendra Das, inmate of Sivananda Ashram, Ahmedabad was sent to Dehradun the same day by air to be for the Darshan and service of Sri Gurudev. At the same time, Rs 100,000 charity was immediately sent to Leprosy Colony near Himmatnagar (Gujarat) and poor feeding was organized simultaneously. Akhand MahaMrityunjaya Mantra Japa was commenced by a large number of devotees at the Ashram Temple. On August 28, 2008, upon receipt of the news of Revered Gurubhagawan’s Samadhi, immediately news was announced through Ashram's website as well as to the local newspapers for the information of devotees to join for prayer meetings at the Sivananda Ashram, Ahmedabad.

On July 31, 2008  Divya Jivan Sanskrutik Sangh, arranged a Prarthanasabha, A prayer meeting at 10.00am at Sivananda Ashram, Ahmedabad at Sri Sri Sri Ashta Laxmi Bhawan to pay homage to our Beloved Gurumaharaj Sri Swami Chidanandaji Maharaj. The meeting began with chanting of Ashram’s traditional prayer “Jay Ganesh Jay Ganesh………… by devotees. The meeting was conducted by Sri Arunbhai Oza, a Vice President and Trustee of Divya Jivan Sanskrutik Sangh, Ahmedabad. The meeting was attended by renowned saints and large number of devotees. Here are the Tributes from the Saints in their own words.

Swami Prashant Swaroop Anandaji of Sri Swami Narayan Gadi Sansthan, Maninagar, Ahmedabad  recalled the past and said what Chidanandaji had ordered his own disciples years ago. Sri Swami Chidanandaji had said, ‘Whenever you come across even a most juniour saint of Swami Narayan Sect you should bow down to him. This shows the humility of Sri Swami Chidanandaji. He also cited the example of Eklavya of Mahabharata fame and said that just as Eklavya acquired Knowledge of Archery by offering devotion to the idol of his Guru Dronacharya, one can attain knowledge by concentrating on the image of his Guru.

Sri Swami Brahma Vihari of B.A.P.S remembered various occasions during which he chanced to come in contact of Sri Swami Chidanandaji. He recalled Chidanandaji’s various qualities such as humility, purity, simplicity, equanimity and said that Sri Swami Chidanandaji Maharaj will remain alive in our life so long as we wish him to remain so, with us and within us.

Sri Bhagavat Rishi from Bhagvat Vidhyapeeth Sola, Ahmedabad recalled how Swami Chidanandaji took care of him while he was a child and suffering from high fever. Sri Bhagavat Rishi was at Sivananda Ashram, Rishikesh as his father Sri Krishna Shankar Shashtriji was doing ‘Bhagavat Parayan” there. He said one should always remember three things, Slok (Sacred name of God), Punyaslok (A person of Godly Nature) and Uttamslok (the God). Well, Sri Swami Chidanandaji was a ‘Punyaslok’.

Sri Gopalbapa representative of Anoopam Mission, Mogri said, ‘The real homage to Sri Swami Chidanandaji Maharaj lies in the fact that we tread the path shown by him and pray to him to sit in our heart and inspire us’.

Sri Piyushbhai of ‘Wagh Bakri Tea’ confessed that only after coming in the contact with Sri Swami Chidanandaji that he learned how to live a selfless life.

On 16th day, a grand Shodashi Bhandara by worshipping 16 saints and a feeding to poor on large scale, Satsang etc were organized at theAshram on Sept 12, 2008.  Other than regular gifts of 16 items to the16 monks namely Srimad Bhagwad Gita, Rudraksha Mala, utensils,(like thaali, katori, glass, kamandal), shawl, pair of clothes, umbrella, walking stick, shoulder bags, etc, a very special gifts were included, i.e. Traveling suitcase with wheels (Pullman), Thermos flasks, tea set, tea leaves, grounded sugar, Gujarati tea masala and Rs 1008/- Dakshina were most humbly offered to all sixteen Saints. This program was attended by a large number of devotees from all  corners  of Gujarat commencing from Valsad, Navsari, Surat, Bharuch, Baroda, Rajkot, Surendranagar, Jamnagar, Junagad, Bhavnagar, Khedbrahma and of course Ahmedabad. Though worshipful, Gurubhagawan Sri Swami Chidanandji Maharaj, may physically not be with us, but in each brick installed by him, around the globe, HE will be keeping alive, for ages to come. HIS divinity, purity, character and saintly hood was down to earth, which will be cherished by generations to come. Om Shanti.